The "easy route" uses the National Parks of the UK (hence red, white and blue) sorted by the heights of the mountains / hills in them - see http://www.nationalparks.gov.uk/learningabout/factsandfigures.htm

The solution to this puzzle actually takes you to the coordinates on the cache page, where you will find a manhole cover. 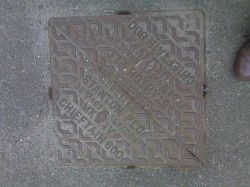 The numbers give you a date of 29th November 2001, the day on which a famous Beatle died, and the letters give you the word VIN.L, which must be VINYL, which is how I used to buy my records.

In fact, the whole cache is about the Beatles' Vinyl albums - look at the logs and you will find loads of Beatles' tracks in there. Three of the Beatles' albums were the Red album, the White album and the Blue album.

Each of A,B,C,D,E leads to a famous track on a Beatles album - you need the album names. Each album has a reference number - PCS..... - these are the numbers you need. (I said you need your PCs!!!)